Experienced housewives know how to store underwear so that it takes up little space and does not deform. Our regular readers - Marina from Yekaterinburg and Valentina from Moscow - agreed to share their secrets. And judging by the fact that exemplary order always reigns in their closets, these women have something to learn if you have not yet developed your own rules for storing clothes. 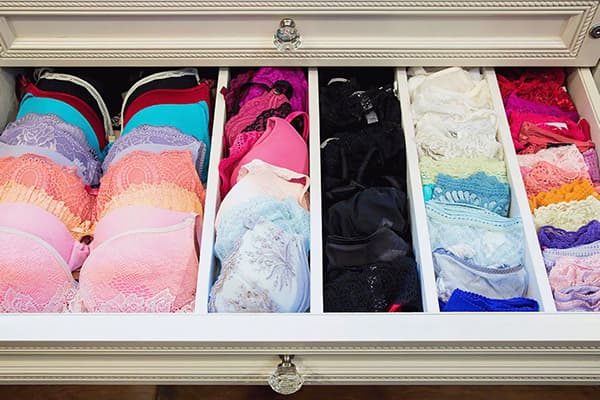 How to lay out underwear in a chest of drawers?

Valentina advises storing underwear in a chest of drawers - retractable shelves allow you to place all things so that they are in plain sight. It is advisable to take the upper box for this type of clothing, since it is usually at a high enough height to get anything out of it without bending over or squatting. In conditions when you need to quickly find something, this arrangement of things is very time-saving.

Here are a few recommendations, following which every woman will quickly and efficiently clean up her wardrobe:

If you’re right-handed, it’s best to place them on the right side of the drawer, and if you’re left-handed, it’s better on the left. This is due to the fact that socks, as a rule, have to be changed twice a day, and if they lie in the access zone of the leading hand, the search for the right pair will take no more than five seconds.

Dimensionless tights require special attention. Inside wooden crates, if they are poorly polished, sometimes there are burrs - because of them puffs may form on the pantyhose. To avoid such troubles, you should buy a special organizer for linen or store tights in their “native” packaging.

Folding bras is not worth it for several reasons.

The best way to store bras in a chest of drawers is to put them in one row so that the cups of each previous bodice are inside the cups of the next. So they will not take up much space and will last much longer. 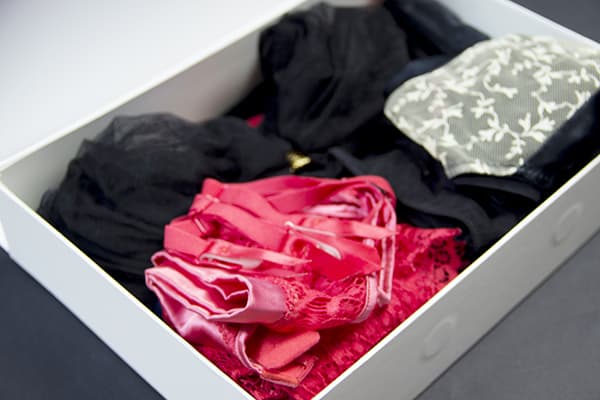 If a woman has expensive stockings and belts for them, corsets and other underwear intended for special occasions, it will be more correct to store it in boxes in the lower chest of drawers.So it will not wear out from constant friction on other things, and at the same time, a place for everyday clothes will be freed up on the shelf. 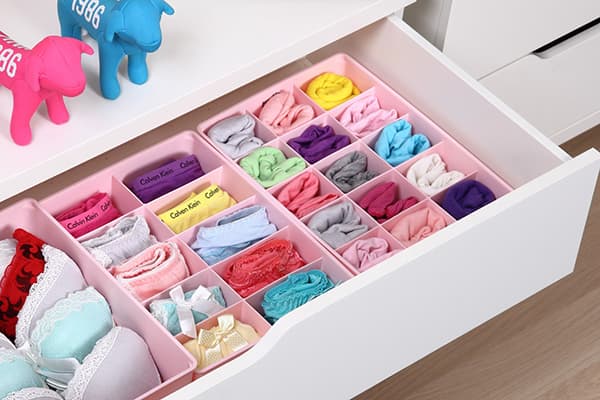 In addition to sorting by color, panties should also be divided into types - for example, seamless underwear folded in one row, sports - in another, romantic and playful - in the third. The one that is used most often should be as close as possible to the right side of the shelf (if the woman is right-handed).

Storage of underwear in the closet

There are two ways to store underwear in a closet - on a shelf and on a coat hanger. The advantage of the first is that a lot of things will fit in a limited space. But if you follow the second method, the sets will always remain in a neat look, and in addition, a woman will be able to quickly find the wardrobe item that she needs here and now. Marina prefers the second method, although she admits that five years ago, when her family huddled in a tiny living room, where there was one closet for all, she had to put her clothes on a shelf.

How to put things on a shelf?

If possible, it is worthwhile to lay socks, tights and stockings on one shelf, and panties and bras on the other. Of course, this advice is suitable for owners of a large number of things. Shelves are ideal for storing underwear, the contents of which can be viewed without bending over or standing on tiptoe.

Since the shelves in the cabinet are fixed stationary and do not extend, you need to place things on them in accordance with the frequency of use. For example, if a woman wears black panties more often, then they should be closer to the door, and if she wears green only occasionally and under a specific dress, then it makes sense to put them near the back wall. The clothes are laid out in one layer, folding up by rolls or folding according to the KonMari method - it is easier to find the desired things. 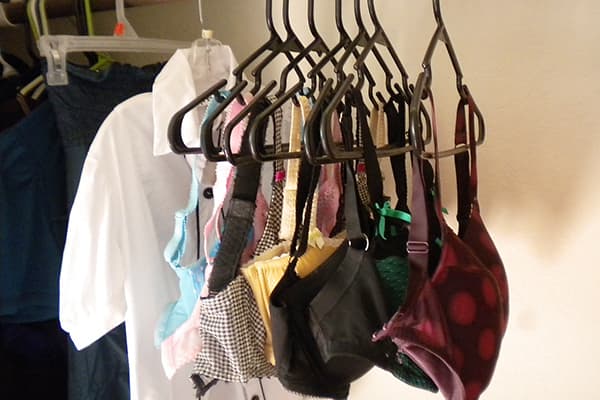 How to hang underwear on the shoulders?

For bras, ordinary hangers are suitable - both with hooks at the ends, and without them. Brassieres are simply hung by straps, and several bras can easily fit on one shoulders. But for panties you will have to buy hangers with clips or special ones - round. Socks are also convenient to keep hanging, but they will need a carousel hanger.

It is advisable to place the shoulders not across the closet, but along - so the linen will not be sandwiched between other clothes and it will be better visible.

It does not matter where to store underwear - in a closet or in a chest of drawers, it is important to fold it correctly. To make it easier to find those things that are used more often than others, they need to be placed closer to the front edge of the shelf. Also, sorting things by color and type will not be superfluous.

Loading ...
Useful articles
They are seized right away: 10 useful little things from the “Fix Price”
Zero waste in the New Year: how to use tangerine peels in everyday life?
How much is New Year's Eve - price comparison in restaurants and cafes
How to remove puffs on clothes and not make it worse?
Good nutrition: we cook for the whole week in one day
It doesn’t come up - it’s so stuck: what can be flushed into the toilet and what can’t be?
Daria Vesenina material author 21.11.2019 changes from 21.11.2019
leave a comment
Cancel