I first encountered mold and fungus in the bathroom a year ago. Just at that time, the builders completed everything that was supposed to, assembled their tools and hastily retreated, leaving me alone with a fresh repair. However, as you already guessed, he was destined to stay fresh not long and not everywhere - after a few months strange dark spots appeared in the bathroom. 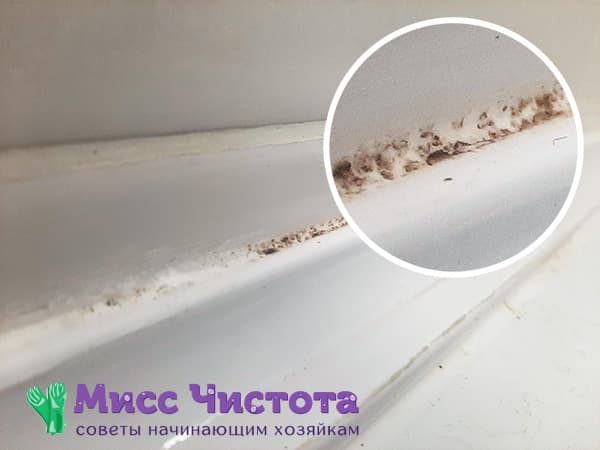 The war on mold, stage 1 - storming the invader by folk methods

The territory occupied by the fungus, not only loses its aesthetics, but also becomes dangerous to health. Disputes, in huge quantities in the air, enter the lungs, then into the bloodstream, after which they are carried throughout the body and settle in all organs, including the brain. An infected person suffers from impaired memory, dizziness, lack of vitality. Sometimes the fungus causes asthma and, according to the latest scientific data, it causes a number of oncological diseases.

In general, it was clear that the situation could not be left to chance. The very first evening, I, waving a virtual flag with the inscription "SOS", went to the forum of housewives mothers, where they advised me about a dozen folk ways to deal with mold. 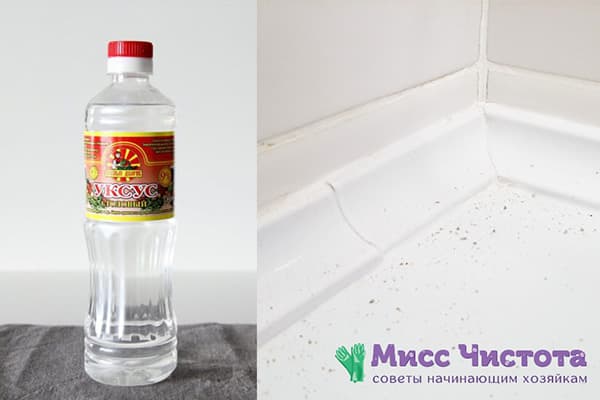 To defeat the invader, it was necessary to take table vinegar of 9% concentration, pour it into a bottle with a sprayer and generously process all the surfaces where the fungus settled. After a few hours, wash these areas with a normal cleaning agent. But for the sake of fidelity, I also walked at the seams with a cotton swab dipped in vinegar.

The result, to put it mildly, did not please. There was less mold, but she clearly did not plan to lose ground. 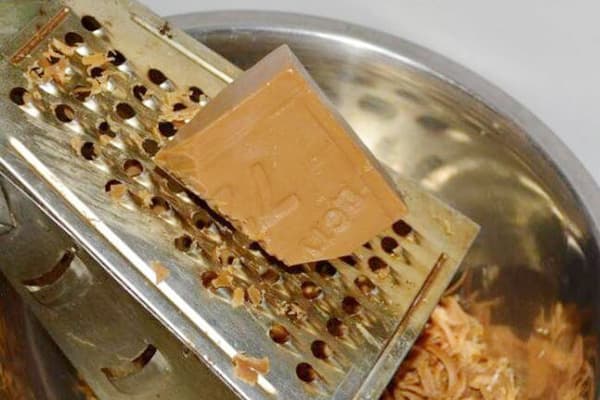 A week later, making sure that the black coating did not disappear anywhere, I set about implementing an alternative:

Laundry soap was able to slightly pacify the fungus on the walls and on the bathroom floor, but it was still far from a complete victory over the enemy. 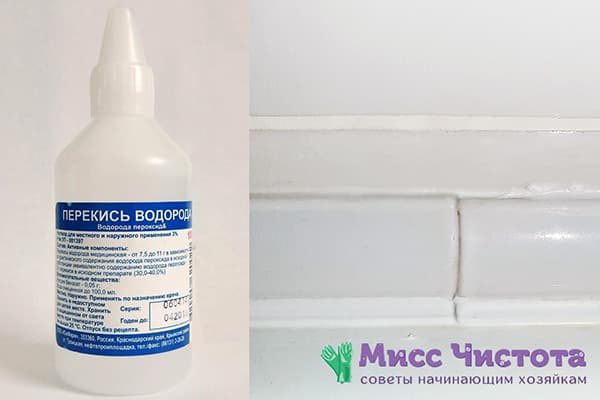 Then I had an emergency at work, which lasted almost a month. To devote time to some mold when he and his beloved is not enough for himself is blasphemy, so I did not take any measures. However, then still I had to remember the danger of the fungus and move on to the third method.

Having packed in the pharmacy with three bottles with a 3% solution of hydrogen peroxide, I again armed myself with a sprayer and, without regret, processed all the places where moldy bloom had grown. The peroxide hissed and foamed - it seemed that it was going to scare the fungus, and not burn it with the power of the oxygen-reduction reaction.

However, the mold gradually began to fade. This happened literally before our eyes, so I added another portion of peroxide to the tile joints. And - lo and behold! - an hour or a half later the bathroom was unrecognizable.In some places there were still dark traces (for example, at the junction between the wall and the side), but in general, the result pleased. To fix it and "finish off" the fungus, I repeated the treatment twice with an interval of one day.

In this war with the spore-bearing enemy could be considered over. However, in a state of euphoria, I managed to stay a little more than three months. During this time, the mold managed to get bored and returned, now occupying also part of the ceiling. 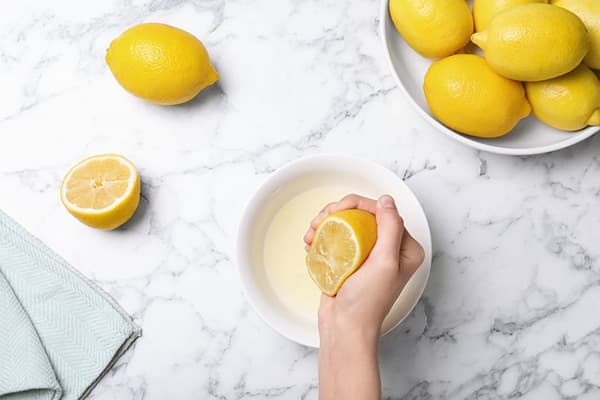 One day I started cleaning in the refrigerator and found there a bag of lemons that had already begun to deteriorate. Immediately I recalled another tip from the forum - the girl said that the juice of these citruses kills mold and fungus in the bathroom for one or two. It was hard to believe, but why not try it?

I didn’t have a special juicer, so I had to use a method checked by the culinary specialists - roll lemons on the table, turning their insides into porridge, and then cut in half and squeeze by hand. Having obtained in this way a whole glass of juice, I sprayed it in those places where the plaque was freely located.

Either my lemons were wrong, or the mold turned out to be a lover of sour, but the result was not pleased even after repeated application of the juice and a whole day of waiting. Fungal spots only slightly brightened. 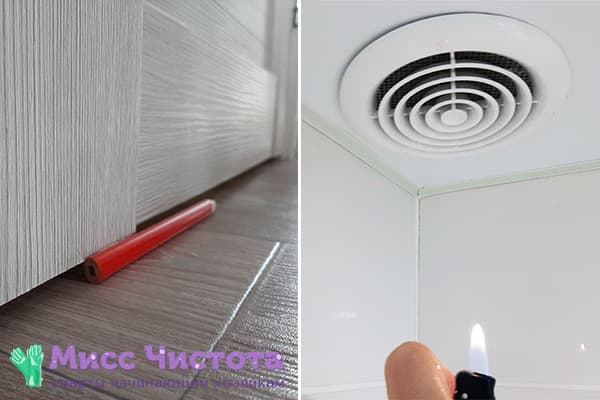 Break in hostilities and visit of neighbors

One of the days, the neighbors also started repairs and decided to change water pipes, and therefore they came to me to discuss this issue. At the same time, they asked me to look at the bathroom to decide where and how to make joints.

Naturally, the mold, which by that time had become almost dear to me, did not escape their gaze. As it turned out, once the neighbors faced a similar problem and searched for a solution for a long time. Chemicals gave a short-term effect - the fungus returned every time.

As a result, after shoveling tons of literature, the neighbors found out that the cause of the appearance of mold raid is:

The neighbors did not have money for a full-scale repair of the bathroom, so they went the least expensive way - they installed a forced exhaust hood so that the moist air did not linger in the bathroom, but immediately went into the ventilation pipe. And since at the same time they had another family member - a cat - they made a mini-laz specially for him at the door. This hole had to perform two functions at once - to provide the animal with round-the-clock access to the tray and guarantee constant air exchange.

Hole the door, especially in the absence of pets, was not included in my plans, but I liked the idea with an exhaust fan. But there was one more nuance - I used the bathroom not only for showering, but also for drying clothes. In order to prevent the hanging laundry from becoming a source of moisture, I had to buy a tumble dryer. It was costly, but as it turned out later, the acquisition was fully justified. 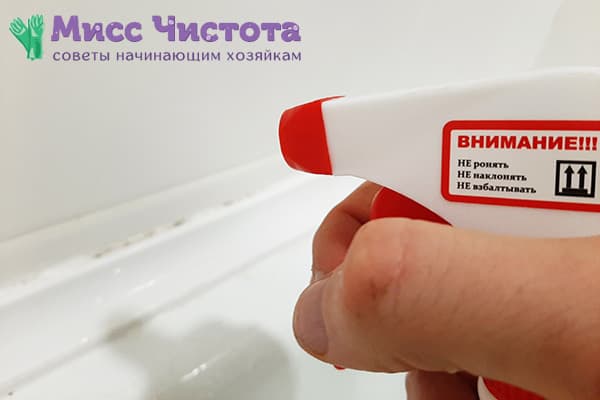 After installing the fan and dryer, there was one unresolved problem - the same plaque on the seams between the tiles. I did not want to wait until he disappears on his own, having failed to adapt to the new climatic conditions. To continue a series of experiments with folk remedies - too, although soda, boric acid and tea tree oil still remained on the list.

I had to go to the same neighbors for a consultation.True, they could not remember the name of the remedy that they themselves used, but they assured me that in any hardware store there is a huge selection of anti-mold drugs.

And indeed - on the shelf were five or six bottles of different colors, volumes and prices. By the way, the sums on the price tags started from 250 rubles and were aimed at a cloudless height.

I was not used to buying household chemicals at random, so I set about studying labels. Surprisingly, but in the composition of these funds were: 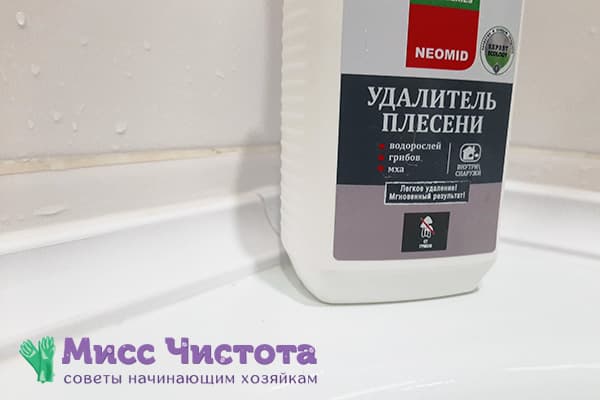 And what happens? Need to pay so much money for a mixture of tap water, bleach and soap? Placing the bottles back on the display, I went for other goods - Belizna (it cost only 16 rubles per liter of a 3% solution) and laundry soap (the cheapest cost 10 rubles). Total 26 rubles against 250 - almost ten times the savings!

At home, they chopped soap and diluted it with water to a state of thick sour cream. I poured White into the sprayer, sent some soap to it and shook it. The resulting solution sprayed all the places where the fungus was visible. After another half an hour, I wet the washcloth and thoroughly washed the seams with it. The window in the kitchen and at the same time the front door had to be opened so that the pungent smell disappears faster, but fortunately there was no limit - the mold disappeared. Absolutely. I hope forever.

Now I periodically add bleach to the water, which is my tile in the bathroom. Just like that, for prevention. Perhaps these are unnecessary gestures, but purity is not excessive.

I would be glad if my experience helps someone to destroy mold in the bathroom without wasting time and money pointlessly. And besides, he knows other ways - effective and personally verified - please share your story about the fight against fungus.

Loading ...
Useful articles
They are seized right away: 10 useful little things from the “Fix Price”
Zero waste on New Year: how to use tangerine peels in everyday life
How much is New Year's Eve - price comparison in restaurants and cafes
How to remove puffs on clothes and not make it worse?
Good nutrition: we cook for the whole week in one day
The most intimate: where and how best to store underwear?
Catherine material author 17.08.2019 changes from 16.08.2019
leave a comment
Cancel